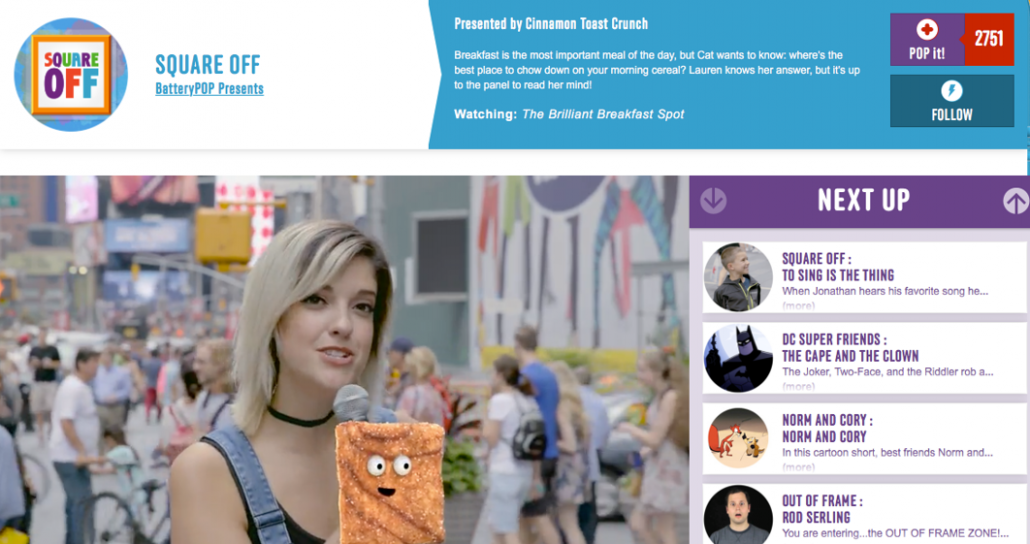 Cinnamon Toast Crunch, a perennial favorite of children cereals by General Mills is continuously vying to stay in the public's eye and in childrens' bowls using cutting edge advertising that dates back over thirty years. The company has primarily used linear television spots lasting around thirty seconds and wanted to explore a longer, native video format lasting three minutes. The idea: to see if a panel of kids can guess the answer of a fellow child being interviewed in Times Square.

With a 10 episode series, each episode lasting around three minutes in length, the Cinnamon Toast Crunch team needed to find a quality distribution channel outside of television. They turned to BatteryPOP, the kid-safe video network created by two former Nickelodeon executives. BatteryPOP specializes in running popular videos of 2 to 3 minutes in length that allows kids on the BatteryPOP site to POP UP (vote up) their favorite videos to the top of the site. There was still a problem, as popular as BatteryPOP is how could they reach a far greater scale of kids while being able to optimize the Square Off campaign to be as effective as possible?

BatteryPOP reached out to KIDOZ, the world's largest content recommendation platform for kids in mobile, which allowed the BatteryPOP team to significantly increase their reach. Collaborating with KIDOZ, an additional 800,000 impressions were delivered. In addition to boosting the campaign, the KIDOZ team also lent their expertise in optimizing the campaign mid-flight in order to maximize performance. KIDOZ added a skip button at the 1:50 mark. This change kept the video completion rate high at over 20% and also increased the click through rate to 15%.